The number of planning permissions granted for dwelling units in the third quarter of 2020 was 12,942, of which 7,214 were apartments and 5,728 were houses. The number of apartment units for which planning permission had been granted increased by 27.5% in the year since the third quarter of 2019. There was an annual increase of 16.1% in houses approved in the current quarter resulting in a total annual increase in dwellings of 22.2%.

1. One-off houses accounted for 13.6% of all new dwelling units granted planning permission in this quarter.

The total number of planning permission granted for all developments was 8,530. This compares with 7,739 in the third quarter of 2019, an increase of 10.2%. Of these permissions, 55.6% were for new constructions, 27.8% for extensions and 16.6% for alterations and conversions.

The total number of new apartments granted planning permission in the third quarter of 2020 was 7,214.

The region with the highest proportion of these permissions was Dublin (61.6%), followed by the Mid-East (25.1%). The Eastern and Midland Region (made up of Dublin, the Mid-East and the Midland regions) accounted for 88.1% of all apartment units granted. The Southern Region (made up of the Mid-West, South East and South West regions) accounted for 9.2% of permissions compared to just 2.7% for the Northern and Western Region (Border and West).

The Strategic Housing Development process is where applications for developments of at least 100 residential units or 200 plus student bed spaces can be made directly to An Bord Pleanála. 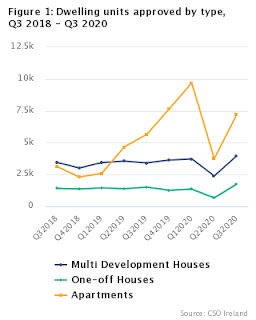 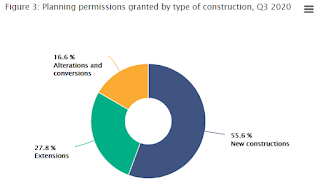 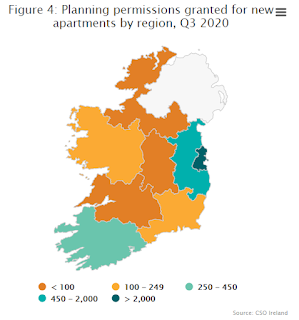 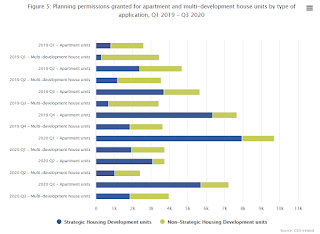