A long-shuttered Dublin city centre building is getting a facelift 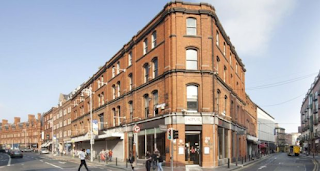 A long vacant Dublin building may finally get a facelift after a planning application was submitted for 41-46 South Great George’s Street. The plan, submitted by Grosam Properties Limited, proposes building a hotel on the site of what was the Dockrell’s hardware store until the 80s and an outlet shoe shop until the early 90s. In total, the retail unit of the building has been vacant since at least the early 1990s. An Indian restaurant operated in the end of the building until 2015. The Grosam plan proposes building a 100-room hotel with a restaurant and three retail units. The site has been on the vacant property register and in 2016 was resecured by the Dublin City Architects.

Read the full article @ thejournal.ie
Posted by Brendan Buck at 02:32