Permission for Bord na Mona/ESB application for a solar farm in parts of north and north west Kildare has been refused. The firms sought a 10 year permission for the construction and operation of 2 areas of solar photovoltaic arrays mounted on metal frames over an area of approximately 200 hectares. The relevant lands are in Drehid, Mulgeeth, Ballynamullagh, Mucklon, Kilmurray (Carbury By), Killyon and Timahoe East. Kildare County Council refused to grant permission, having regard to its policy "expressed in NH5 Section 13.7 of the Kildare County Development Plan, 2017-2023, to inter alia protect favourable conservation status of habitats and protected species, including those listed under the Bird Directive, the Wildlife Acts and the Habitats Directive and to protect and promote the conservation of biodiversity outside of designated areas and to ensure that species and habitats that are protected under the above legislation are adequately protected". It is open to the applicants to appeal the decision to An Bord Pleanála.
Read the full article @ kfmradio.com
Posted by Brendan Buck at 02:55 No comments:

Kildare County Council granted planning permission for a €30 million state data centre. The planning application, submitted by the Office of the Government Chief Information Officer at the Dept. of Expenditure and Reform in February,  is for a portion of the government's campus at Backweston in Celbridge. Leave is sought for a data centre with a total footprint of 5,474sqm, with an additional c.2826sqm in external plant area. Kildare County Council, on two occasions, requested more detailed information on the proposal. It has now granted planning permission.
Read the full article @ kfmradio.com
Posted by Brendan Buck at 02:53 No comments:

A PLANNING APPLICATION for the first batch of more than 500 new homes at St Michael’s Estate in Inchicore has been lodged with Dublin City Council. Circle Voluntary Housing Association has applied to construct 52 apartments as part of a pilot housing scheme which aims to provide social benefits to older people. The scheme is separate to plans announced last year for hundreds of new homes at the site, which will form Ireland’s first-ever ‘cost rental’ housing scheme. It will act as an integrated housing development for older people which will allow them to remain in their own homes for as long as possible.

Read the full article @ www.thejournal.ie
Posted by Brendan Buck at 02:50 No comments:

Why foundations of our building regulations are as weak as ever

In August 2016, customers of the Liffey Valley Gym in west Dublin found out that it had closed down … The gym had been open since 2004, in a building known as Larkfield House. Larkfield House is owned by a company called Cavvies Ltd, controlled by local businessman, Vincent Cosgrave, and his daughter Jackie. The family also owns three hotels in west Dublin, as well as other business interests. Almost immediately after the closure of the gym, a planning application was lodged with South Dublin County Council to convert the building into apartments. What happened thereafter, in terms of building control, was shocking. The law was not so much broken, as completely trampled on. Regulations that were supposed to be watertight were exposed as little better than useless. And despite what has now emerged, there is, as of yet, no sign that any prosecution will take place. 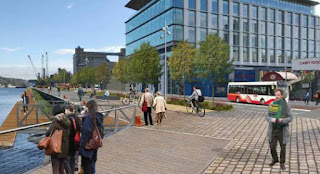 A JUDICIAL review is to be carried out into a proposed €6.5m plan to transform the city Docklands road network in anticipation of future development of offices and homes. The plans were recently granted planning permission by Cork City Council but an application to the High Court by the Save Cork City association has resulted in a judicial review of the ‘Cork Docklands to City Centre Road Network Improvement Scheme’. The scheme will seek to improve flows between the city centre, Docklands, and the N27, through a raft of measures which will include works on Victoria Road, Albert Road, Centre Park Road, Monahan Road, and as far as City Hall.
Read the full article @ www.echolive.ie

Posted by Brendan Buck at 02:42 No comments:

Application for 245 build-to-rent apartments in Cookstown

A residents’ group living near Dublin Airport has lodged a planning appeal which, if successful, could result in the demolition of a €22 million passenger boarding facility, which opened only two years ago. The St Margaret’s/the Ward Residents’ Group is challenging a recent decision of Fingal County Council to omit a condition contained in the original grant of planning permission for the building. The condition stipulated that the permission was only for a seven-year period after which the building would be removed in its entirety and reinstated to its former position. The single-storey building, which was completed in October 2017, provides waiting and boarding areas for passengers.
Read the full article @ The Irish Times
Posted by Brendan Buck at 02:36 No comments:

The success or otherwise of a planning application for a €7m project along the Wild Atlantic Way in Cork will be watched closely by those planning or thinking about similar major tourism projects elsewhere along the route, and in particular in Donegal. The €7m Dursey Island project in Cork has been described by objectors as "undermining" the quality and experience of Ireland’s wild coastal landscape. An Taisce, Birdwatch Ireland, and Friends of the Irish Environment have all submitted extensive objections to the application by Cork County Council in partnership with Fáilte Ireland to An Bord Pleanala for a €7m development on Dursey Island off the west Cork coast.
Read the full article @ www.donegaldemocrat.ie
Posted by Brendan Buck at 02:34 No comments:

A community of nuns in Dublin has avoided having to pay a vacant site levy by claiming a meadow was used as a location for exercise and prayer. The Carmelite order has successfully challenged a decision of Dún Laoghaire-Rathdown County Council to place an overgrown field they own near Stillorgan on the vacant site register in December 2018. The nuns claimed a circular path surrounding the site at the Carmelite Monastery of St Joseph on Kilmacud Road Upper was in regular use for exercise and prayer. The local authority believed the 1.64 hectare site should be registered as vacant as it was not in use and situated in an area where there was a need for housing as well as being zoned for residential development.
Read the full article @ The Irish Times
Posted by Brendan Buck at 07:38 No comments:

An Bord Pleanála (ABP) has upheld the decision to refuse planning for a permanent building for Cork Educate Together Secondary School, mainly due to concerns about traffic. The proposed 600-student development in Douglas would “give rise to traffic hazard”, and could obstruct road users and endanger pedestrians, the national planning authority agreed. "Having regard to the internal road layout of the proposed development, the Board considered that it would give rise to serious pedestrian and vehicular conflict," ABP said in its decision.
Read the full article @ The Irish Examiner
Posted by Brendan Buck at 07:35 No comments: