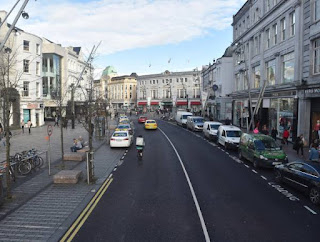 It follows almost two hours of rush-hour gridlock in the city centre last night and complaints of a lack of warning signs about the traffic arrangements, which came into effect on the main street yesterday. Private cars are now banned from the area from 3pm to 6.30pm seven days a week. Access is restricted to public transport, taxis, cyclists, and emergency vehicles during those times. The move, part of the 2012 City Centre Movement Strategy, is designed to create a time-regulated bus lane along St Patrick St to ensure the almost 1,000 Bus Éireann movements run more efficiently. While the car ban was introduced smoothly, there was severe traffic congestion on the outskirts of the city-centre island from 4pm.
Read the full article @ The Irish Examiner
Posted by Brendan Buck at 23:57