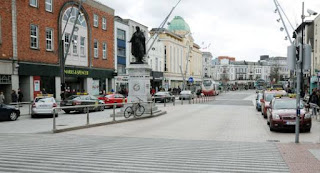 CITY HALL has urged traders to be patient with the Patrick Street car ban after calls have already been made to scrap the scheme. The City Council has come under fire for its partial ban on private cars on Patrick Street, between the hours of 3pm and 6.30pm each day. The ban was introduced two weeks ago to improve public transport but has already been described as damaging to city traders. Cork Business Association chief executive Lawrence Owens said things are only going to get worse when the Easter holidays end and children return to school. The CBA chief said the City Council should be making it easier for customers to come into the city and highlighted the fact that the Gardaí, who are currently manning the roads surrounding Patrick Street between 3-6pm, will not always be there and questioned what would happen when their presence is removed.
Read the full article @ Evening Echo
Posted by Brendan Buck at 23:52