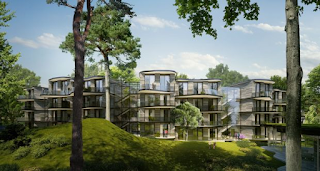 A luxury apartment scheme on a 3-acre site beside Castle Park School in Dalkey has been given the go-ahead. Developer Twinlite has obtained a final planning grant from An Bord Pleanála for the 49-unit development.  Initially planning permission was refused by Dun Laoghaire Rathdown County Council for three reasons – most curiously, because the council felt Twinlite needed to consider the future needs of the school and whether it needed space to be retained to allow for its expansion.
However the school had sold a portion of its lands for redevelopment in 2004 for a sum believed to be around €19.8 million, which funded a €14.5 million redevelopment of its facilities.  In the developer’s appeal to An Bord Pleanála, it argued that the lands could no longer be considered part of the school landholding for future development on the basis that the school had long ago divested itself of any interest in the site. The Bord accepted this position and granted planning permission.

Read the full story @ The Irish Times
Posted by Brendan Buck at 02:29