New plaza approved for north side of Ha’penny Bridge 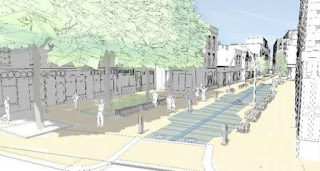 The creation of a new pedestrian plaza for Dublin beside the Ha’penny Bridge on Liffey Street, has been approved by city councillors, despite objections from car park owners. The council earlier this year decided to draw up plans for a new plaza on the northside of the city following the refusal by An Bord Pleanála of the College Green plaza. A planned water feature incorporating a line of water jets, or mini fountains, has been scrapped after the council determined it would be “visually incongruous” and “impeding to the movement of pedestrians”.
Read the full article @ The Irish Times
Posted by Brendan Buck at 07:39