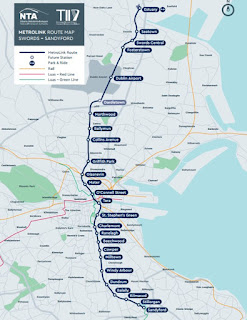 The €3 billion euro Metrolink project which will connect Swords to the city centre in just 25 minutes, is finally moving forward after years of delays. Details of the emerging preferred routes have been revealed and an extensive public consultation process will begin next week on the 'high capacity, high-frequency cross-city rail corridor'. The first takes place today (Tuesday) at Fingal County Council offices in Swords from 2pm to 8pm. On Thursday, March 29, there will be another one in the Crowne Plaza Hotel Northwood from 2pm to 8pm. Some 4,000 jobs are expected to be created during the construction phase. Formerly known as Metro North but now renamed Metrolink, the proposal will see a 26km rail line connect Swords to Sandyford, via Dublin Airport, with a total of 25 stops. Provision has been made for a future stop at Dardistown.