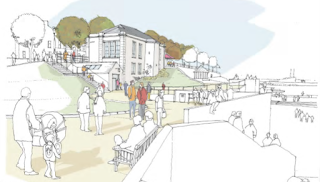 Work on the re-development of Dún Laoghaire’s derelict baths site is to begin as soon as possible. Contracts were formally signed on the 10th April by Dun Laoghaire Rathdown County Council. The planned programme of works was initially expected to cost €2.5 million but the cost is expected to substantially higher given additional engineering works required to secure the road and retaining walls between the DART line and the site.

The new Dún Laoghaire Baths, which has been designed by dlr Architects' Department (details here), will see a new public café linked to an outdoor terrace with views over the Bay, along with studio workspaces for artists and new life guard facilities. New public toilet facilities at street level will be fully accessible for the mobility impaired and a new jetty and changing areas will provide access to the water's edge for swimmers and landing points for canoes, kayaks and other water sports equipment.

The development will take approximately 22 months to complete and will open to the public in the spring of 2020. The new Dún Laoghaire Baths will be a long-term, public amenity for the area and county. It will provide not only a connection between Newtownsmith and the People's Park, but will also bring link the town of Dún Laoghaire with its seafront. The project will breathe new life into the seafront and will attract more visitors to Dún Laoghaire town.

Link to DLRCC website here.
Posted by Brendan Buck at 00:51