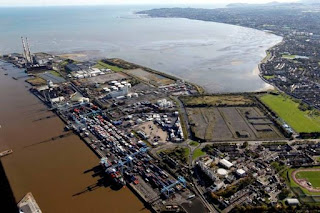 Plans to build almost 1,000 social and affordable homes at the Glass Bottle site on Dublin’s Poolbeg peninsula have been appealed by the site’s receivers, despite the State owning a large stake in the land. An Bord Pleanála will later this month open a public hearing on Dublin City Council’s plans for fast-track development of up to 3,500 apartments in a new Strategic Development Zone (SDZ)at Poolbeg. Last May the council said it had reached a deal with then Minister for Environment Simon Coveney, Nama and receivers, that State funding would be made available to bring the number of social and affordable homes in Poolbeg to 900.
Read the full article @ The Irish Times
Posted by Brendan Buck at 00:07