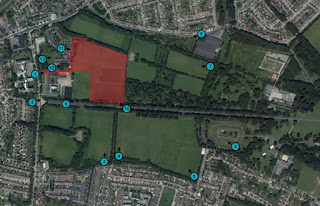 An Bord Pleanála has granted permission, subject to 24 conditions, for the proposed development comprising 536 residential dwelling units (104 no. houses and 432 no. apartments), as submitted by Crekav Trading GP Limited at lands to the east of St. Paul’s College, Sybil Hill Road, Raheny, Dublin 5. The full planning application can be reviewed at www.stpaulsshd.ie/

The application was submitted to An Bord Pleanála on 22nd December 2017 under section 4 of the Planning and Development (Housing) and Residential Tenancies Act 2016 and decided on 3rd April 2018.  The Board's Planning Inspector recommended a grant and the Board agreed with this.

There were 1102 submissions lodged to the Board. Most of these were objections. This decision will shine a strong light on what many will feel is the downside of the new Strategic Housing Development process under which a small number of unelected individuals can make a decision, in the face of enormous opposition, which impacts in hundreds of individuals and families.

The key documents relating to the Board’s decision are available as follows:

Much of the controversy around this decision lies with the zoning of the lands. In Dublin City Development Plan 2016-2022, they are zoned Objective Z15 Institutional & Community which seeks to ‘protect and provide for institutional and community uses and to ensure that existing amenities are protected’.  Residential development is ‘open for consideration’ under this zoning objective.

Those Dublin City Council's councillors who voted to adopt the current Development Plan will need to explain why they did so given that it has facilitated the development of lands many thought were protected from development.

Communities across the country need to start asking questions about the zonings of the green spaces, playing pitches and institutional lands in their areas when plans are being drafted by their local authority.

It is also clear that there is a need to stop selling land to religious orders as time and again it ends up being developed. Here the problem is that St. Paul’s playing fields are not in Dublin City Council ownership as the land was sold to the Vincentians in three separate transactions in 1952, 1953 and 1959 without restrictive covenants.

There will be a total loss of 6 pitches as a result of the proposed development- 3 x soccer pitches, 2 x rugby pitches and 1 x GAA pitch.  This loss is not just to a school, but to the community. While I acknowledge the loss of the playing pitches within St. Paul’s to the wider community. Outside of school times and when not required by the school, agreements were in place for their use by community groups/local sports clubs.  Detailed submissions were made to the Board by both private individuals and sports clubs outlining the structure which was in place until relatively recently, the pitches involved, the sports involved, the numbers using them, hours of use and the like.

It is notable that the Chief Executive report of Dublin City Council recommended a refusal of permission. That report however acknowledged that the Board may grant and set out area of the scheme it felt should be amended. But the fact is, has this planning application been made to Dublin City Council, it would have been refused. The Board may subsequently have granted it, but that would have been on appeal. The objectors to this scheme now have no appeal option. The Strategic Housing Development process has removed any appeal option leaving communities like those in Raheny with nowhere to turn when a planning decision they strenuously oppose is made. This, obviously, is why these measures were introduced.