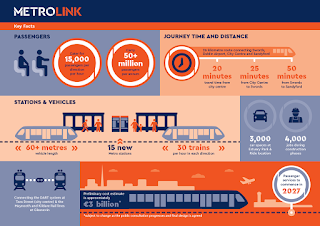 Irish transport chiefs have today revealed their finalised plans for Dublin MetroLink – which will see a 26 kilometre route connecting Swords, Dublin Airport, the city centre and Sandyford, carrying 50 million passengers per year. The €3billion project was announced in the Government’s 10-year capital investment plan and its to be build and operating by 2027. And the National Transport Authority and Transport Infrastructure Ireland have announced the timeline for plans. They reveal that the Metro Link will join the Luas green line at Charlemont. The existing line from Charlemont to Sandyford will be upgraded for the Metro line. And then from Sandyford, the Luas will continue to Bride’s Glen.
Read the full article @ The Sun
Posted by Brendan Buck at 01:23