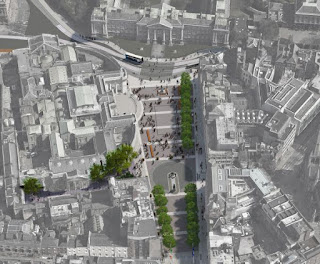 The Green Party has called for the construction of the proposed Civic Plaza for Dublin's College Green. A Board Pleanála Oral Hearing is scheduled to commence on Monday 12th March in Dublin's Hotel Riu Plaza the Gresham on O'Connell Street at 10:30am. The Plaza plans were submitted by Dublin City Council to Board Pleanála for approval. Councillor Ciarán Cuffe from the Greens is one of three public representatives who have made a submission to the Board.
Councillor Cuffe, chair of DCC's Transportation Strategic Policy Committee said: “This is a unique opportunity to give Dublin a civic plaza that we can all be proud of. For far too long College Green has been dominated by noise and pollution from cars, trucks and buses. Tomorrow's hearing will hear of the benefits for pedestrians, cyclists and public transport users.
“Currently the east-west movement of vehicles through College Green slows down buses, trams and pedestrians. It also causes safety issues for more vulnerable road users. Building the plaza will reduce these risks and allow for a radical overhaul of bus routes in the Capital. Currently one third of all buses pass through College Green every day. Dublin Bus has been reluctant to change their routes to meet the needs of the travelling public in the twenty-first century. They need to work with the National Transport Authority to fast-track the changes promised by the overdue 'Bus Connects' route review and ensure that destinations such as Dublin's Docklands and the outer suburbs are better connected by bus. This would relieve the pressure in College Green and ensure that tram and bus routes complement each other rather than vying with each other for valuable road space. With the plaza in place buses will still be allowed pass north and south in front of Trinity College, and will be allowed terminate and turn around at the western side of the plaza.
“It is crucial that the demands of car park owners and operators do not dominate the discussion. For far too long the car lobby has allowed Dublin city centre to be choked with noise, fumes and traffic. It is now time for the citizen's voices to be heard. Thirty years ago naysayers said the city would grind to a halt if we took cars and buses out of Grafton Street. It is now a major success story.
“As the city grows in population it is time we allocate more space to the pedestrian and cyclists. The College Green plaza will speed up pedestrian flows in the city centre and improve safety for cyclists. It is time to give the plans the green light. It is fitting that the pedestrian is finally given some breathing room and space to linger in the heart of the city.”
Posted by Brendan Buck at 04:26