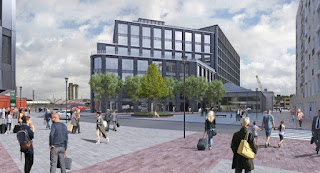 The Port of Cork Company confirmed yesterday that it has lodged an appeal with An Bord Pleanála against the decision made by Cork City Council last month to grant permission for the €160m HQ scheme at Horgan’s Quay. The appeal was lodged on Thursday just hours before the 5pm deadline. The mixed-use HQ project, proposed by BAM and Clarendon, has been earmarked for a six-acre north docks site, next to Kent train station and overlooking the port’s quays. It includes some 400,000 sq ft of office space, with capacity for up to 3,500 employees, more than 240 apartments and a 136-bed hotel across eight buildings. City planners gave it the green light late last month. But the port company, which is involved in a legal battle with BAM Civil Ltd over the tender process on part of a massive port building project in Ringaskiddy, confirmed it is appealing the decision.