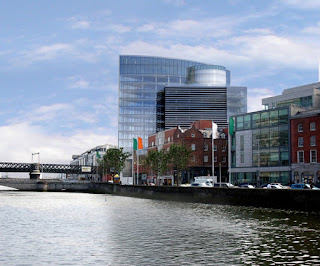 Developer Johnny Ronan’s plan to build the tallest ever building in Dublin has been turned down by An Bord Pleanála. The appeals board has refused planning permission for the 22-storey tower on George’s Quay at Tara Street in spite of its own senior inspector, Gillian Kane, recommending that planning permission be granted what she has described as a “beautiful” building. In its formal order, the board ruled that the 88-metre high tower would seriously detract from the setting and character of the Custom House, one of the city’s most important architectural set pieces, and would also adversely affect the River Liffey Conservation Area and the O’Connell Street and Environs Architectural Conservation Area.

The Dublin City Council planning file and decision  can be reviewed here.
The Board's Direction, Order and its Inspector's Report can be found here.
Posted by Brendan Buck at 07:25