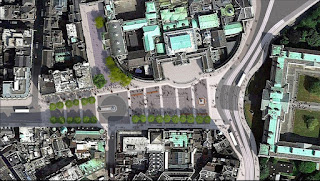 College Green will become a venue for summer beach parties and winter ice skating rinks under plans to transform it into a fully-pedestrianised civic plaza. Plans for the space were laid out by Dublin City Council officials at an oral hearing by An Bord Pleanála. Architect Paul Kehoe told the hearing that the green will be become an adaptable public space - "A space that works equally well for everyday social intercourse as it does for events and performances," he said. Along with temporary beaches and skating rinks he suggested films, screenings and markets would be among the events that could be held at the space.

Read the full article @ The Irish Independent
Posted by Brendan Buck at 04:50